The third day of WMDF.

We were wondering how the coming typhoon would be going.
Then, we held a workshop to make Teru teru bozu!

Thanks all to visitors who joined and artits helped us make Teru teru bozu.
Mr. Teru teru bozu, please protect us from the typhoon and bad weather until WMDF ends.

“Dos Sones de Corazones cheerfully” made us forget about the concerns about weather.

They play Cuban music really good, so they even go to Cuba to do their performance.

They showed authentic Cuban music with their lively rhythms and singing.

In contrast to their fully bright music, German group, “La Bicicleta” played calm and emotional Tango originated from northern hemisphere.
Their passion which can be seen in the melancholic melody made people attracted.

Those two groups seem to play completely different kinds of music, but actually they have a something big in common.
That is, their music naturally make people dance.

People who were listening began to dance one after another. The view people freely expressed their feeling of joy reminded us of the essence of WMDF. It was splendid time.

Today was Sunday, so lots of people came to WMDF.

Each stage did their unique performance, so everyone, from child to adult, enjoyed!

“The Screen Tones” who joins WMDF for the first time were united mainly by Masayuki Kusumi, the author of the comic, “Kodoku no Gourmet(Solitary Gourmet)”
They played songs used in the TV drama of Kodoku no Gourmet.
When Mr. Kusumi said the famous phrases in the comic, like “Goro, Goro” and “Hara ga, hetta (I’ve got, hungry)”, people especially fans got really excited. Maybe you got hungry during their performance.

Austrian group, “Trachtenverein Rossecker Bruck an der Mur” had no stages to play today, so they traveled around Hakodate. “Noda Boat Rental” at Goryokaku park offered them to enjoy boating for free. Besides, they could go up to the observation of Goryokaku tower for free, too. They said they liked the view from up there. We’re grateful for the supports of Goryokaku park and Noda Boat Rental. 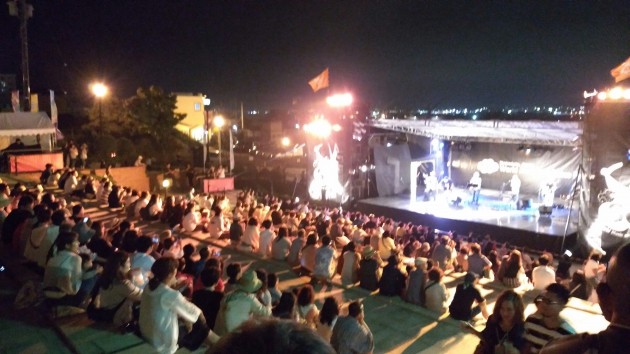 The 10th WMDF has started at Motomachi park! Visitors, performances and Mogu-fes filled the park with joy today.
Especially, the opening performance by Russian group, “stavropolye” was fantastic.
Along with their relaxing music, thrilling dance by male members, and ballet by female members in the traditional uniform made all people in Atlas area super attracted.
Tricks with swords flying quickly in the air were magnificent. Ballet, not only dance in itself but also even the edges of cloth flipping with dance, was gorgeous.
On Sunday, tomorrow, amazing performances, yummy foods, and exotic goods will be waiting for you. Please check them out and meet the worlds!
Thanks to every WMDF staff for hard work today! It seems that tomorrow will be cooler than today, but still please take care and make good festival together. 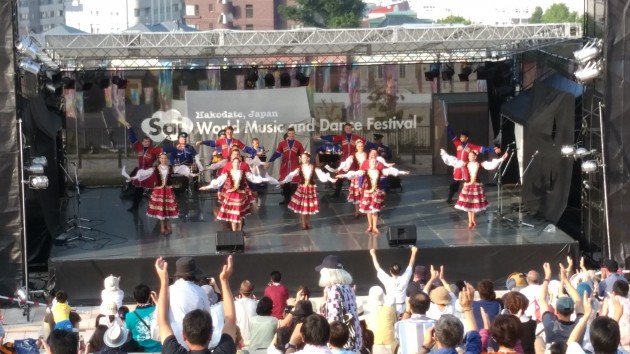