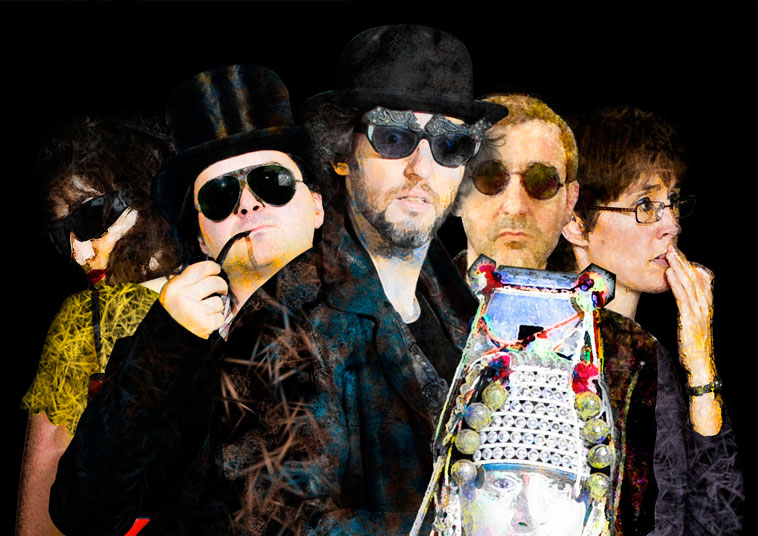 Uchronie means “Not in any time”, or “Out of the frame of time”, from the Greek ou-kronos, “out of – time”. The group describe their concept as “Chanson Rock Socio Poétique” (socio-poetic rock singing). They present an unlikely (here and) now, out of the time between yesterday and tomorrow.

Uchronie are deeply French while also aiming at a universal style and message. Since forming in 2009, they have built their directory of rock songs around Gilles’ guitar-that-never-stops, Gaël’s hallucinated texts, Rachel’s bindweed-keyboards, and Philippe’s Earth drums. Singer Emilie hails from the Paris Higher School of Dramatic Art, so pieces are “inhabited”: both sung and acted.

They choose texts that convey both poetry and an engagement with society. For example: “Ecris-moi” (Write me) is about 11 September 2001; “La chance” (Chance) is about “sans-papiers” (paperless people: aliens without status); “Les loups” (The wolves) is about both craziness and intolerance. Texts are mostly original, but are sometimes borrowed from famous sources (“Xmas waltz” and part of the text in “Les loups” are from Boris Vian).

Uchronie’s members span a broad slice of the present, with musicians between the ages of 25 and 52. They often play for free, for the pleasure of being gathered in the here and now, from young to old people, for a moment of emotion and love. Two members of Uchronie were in Hakodate in 2010, and came to watch WMDF 003. The band was in its infancy then: WMDF is very happy to welcome the full entourage of the grown-up version, and its theme redolent of the Long Now.

Since the lyrics of the songs performed by Uchonie are an integral part of their performances, they have prepared a complete file of lyrics used at WMDF (pdf 204K). Please enjoy!