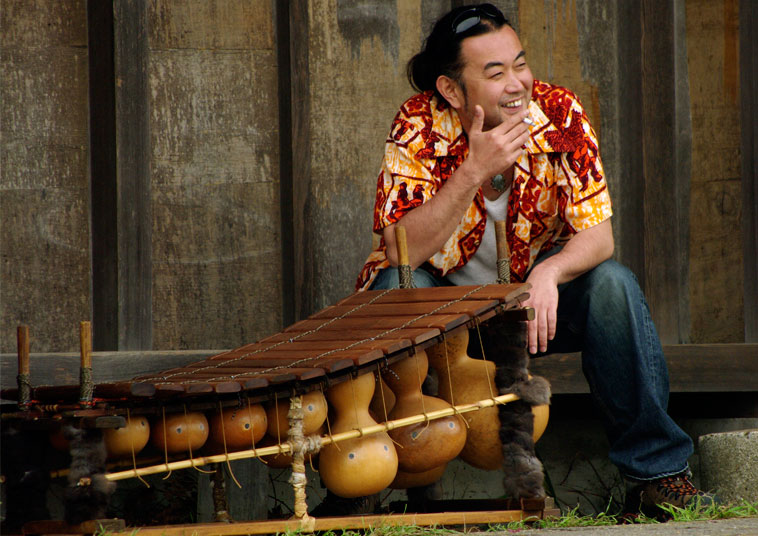 Yao began playing Japanese drums from a very young age. In 1997-1998, he went on a solo journey around the percussion treasure-house countries of North Africa: Senegal, Gambia, Mali, Burukina Faso, and Ghana. There, he became intimate with the various African percussion instruments such as the djembe, balafon, and kalimba. He was able to perform at many venues and at ceremonial functions. His percussionist’s name “Yao” was bestowed on him by his fellow performers during his year in Africa.

When he returned to Japan, he spent much time in the studio, for instance providing the drums and percussion for the psychedelic jam band “Dachambo”, and helping to perfect the folk music sound of the tribal jam unit “Earth Conscious”. He also threw himself into live performance work, including Fuji Rock, Summer Sonic, Rising Sun, and Australia’s Exodus Festival and Woodford Folk Festival.

As well as performing, he has honed his skill at designing, manufacturing, and repairing instruments by hand, turning himself into a percussion instrument craftsman. He began his full solo career in earnest in 2009, when he took his orginal instrument creation of the “airofon” on a country-wide tour he called “The Sounds of Heaven”. As if all this wasn’t enough, in 2012, he formed not one but two new bands: “The Crash Mustard” and “The Coxa”. Like Yao himself, these bands defy categorisation, and explore new playing and groove styles.