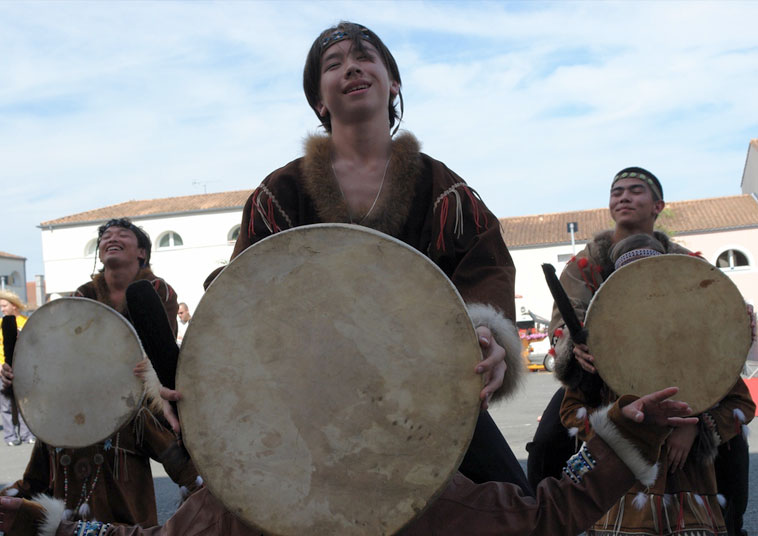 On the west coast of the Kamchatka Peninsula, within 8 kilometers of the Sea of Okhotsk, the town of Palana lies on the right bank of the Palana River. Since olden times Palana has been imbued with special qualities by the Koryaks, Kamchatka’s indigenous people. It was a land of strong and gifted nomads who combined hard work with a creative state of mind. Every family had its own singers, storytellers, and tambourists who expressed peoples’ identity in traditional feasts, and transferred knowledge and experience through the generations without any schools or textbooks.

Here, in 1994, Svetlana Belyaeva decided to create the folk dance ensemble Eygunychvan. The most original feature of the group is that it shows not only dances but also scenes of Koryak traditional ceremonies. For example, in 2008 the group presented a unique ceremony based on the rituals of a Koryak wedding. The group’s choreographer Sergey Kutynkavav carefully studied ethnographic sources and reproduced the ceremony in all details according to old traditions on a meadow by the river. Everything was fully authentic: the rituals of dressing, seizing, and purification with sacral deer, dances, songs, and traditional sports competitions.

Palana has a population of only 4,000, and is the administrative centre of the “Korjak Okrug” or “Koryakia” autonomous district, which has less than 20,000 residents in its 300,000 square kilometers (more than three times the size of Hokkaido). The natural isolation of its space has made a large impression on its folklore traditions, and many dance elements are associated with hunting and the basic ways of survival.